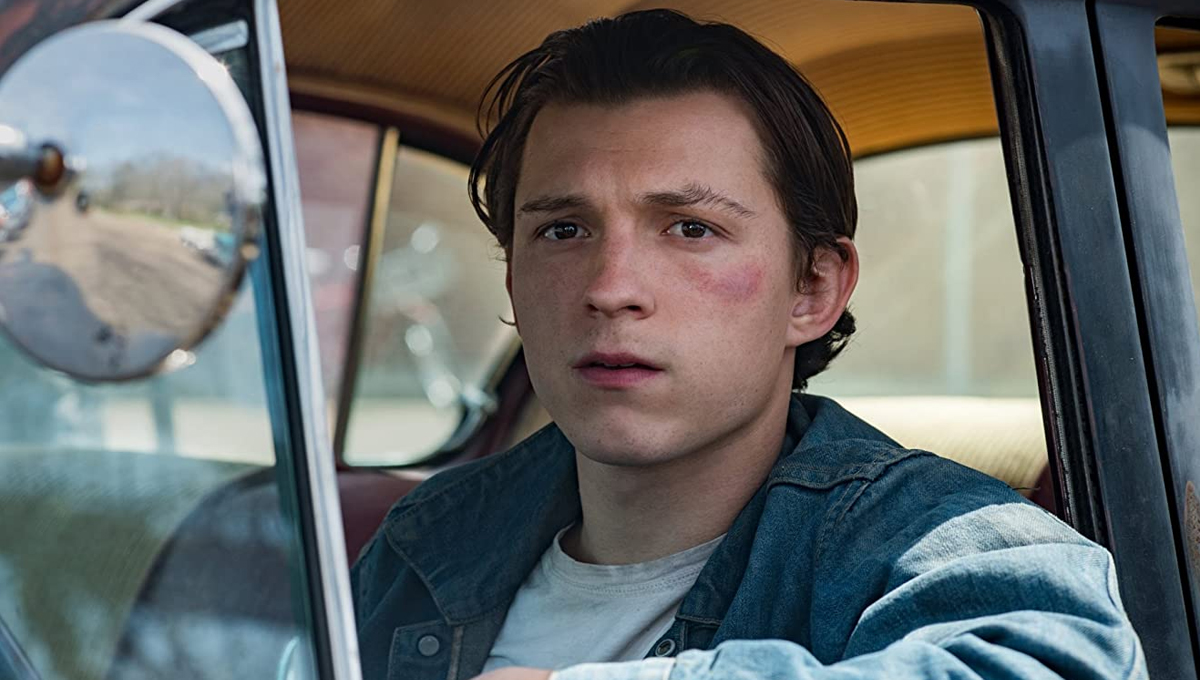 Spider-Man, Pennywise, Edward Cullen, The Winter Soldier, and Dudley Dursely are part of the unholy ensemble assembled in The Devil All the Time: a black-as-sin slice of Southern Gothic based on the novel by Donald Ray Pollock. Set between the end of World War II and the Vietnam War, the film presents a sprawling tale of violence and misery passed down through generations. At the center is Arvin Russell (Tom Holland) an essentially decent young man whose father (Bill Skarsgård) had returned from the war traumatized into a religious fervor that leads him to prostrate himself in front of a home-made woodland crucifix every night, fighting, as Arvin says, “The devil all the time.”

He’s our anchor point in a story that plays like a portmanteau of pain as corrupt or doomed characters interlink in the small town of Knockemstiff, Ohio. Antonio Campos (Afterschool, Simon Killer, Christine) has done an incredible job of building not just a world but a snapshot of an era, a sunbaked parish of dusty poverty that’s peopled by violent and desperate men. It’s bleak, relentlessly so, but the incredible performances across the board make The Devil All the Time fascinating in a way that becomes almost addictive.

Our narrator is the author Pollock himself, who was born and raised in Knockemstiff (his first book was a collection of short stories named after the town and based on his experiences), and he guides us through the stories of the town character by character, spanning 20 years, beginning with war vet Willard’s (Skarsgård) great romance with waitress Charlotte (Haley Bennett), and later his terrible betrayal of his son. We meet serial killer couple Jason Clarke and Riley Keough, who treat murder as their religion and never get apprehended because of their connection to a corrupt and incompetent cop played by Sebastian Stan.

Campos has said that this is a film about faith and so it’s perhaps no surprise that it’s at its most electric in two narratives surrounding the church and its preachers.

After an extraordinarily diverse body of work over the last few years–Good Time, The Rover, The Lost City Of Z, The Lighthouse, and most recently Tenet, with The Batman incoming–Robert Pattinson has well and truly proven what an incredibly exciting young actor he is, and as predator preacher Preston Teagardin, he oozes sleaze. Possibly the most terrifying of this collection of killers and cranks, Teagardin wields his power with a reedy voice and a sweaty upper lip, and Pattinson nails his cruel perversions perfectly.

The utter revelation of the movie, however, might be Harry Melling as preacher Roy Lafferty–a small town fanatic who pours living spiders onto his face as part of his sermons, and who catches the eye of pious naif Helen (Mia Wasikowska). Needless to say it ends poorly for both. Melling is best known for playing Dudley Dursley in the Harry Potter franchise but here he is completely unrecognizable as such, nailing the very specific Ohio accent and howling to the God he thinks has forsaken him.

Holland’s Arvin is our center point and one of the very few (male) characters who isn’t larger than life. Holland doesn’t get to play as much as the others then, but he does a fine job of representing the moral compass of the film. He suffers terrible things, and does terrible things, but this is as close to what a good man looks like in Knockemstiff.

The rest of the townsfolk are so ‘Other’ (particularly to a British audience) that they are fascinating to gawk at but difficult to identify with. Just as well, perhaps, since a story with this much horror would be way too much to cope with if told as melodrama. Instead these curios exist outside the law, outside recognizable civilization, and in a hardboiled bubble with an atmosphere entirely of its own. And the atmosphere really is all pervasive. For some this Godless tale of the evil that men do might be just too nihilistic, but that can’t detract from Campos’ meticulous construction of a time and a place, and the powerhouse performances all round. You might not like what you’re watching but it’s almost impossible to look away.

The Devil All the Time is available on Netflix on Wednesday, Sept. 16.