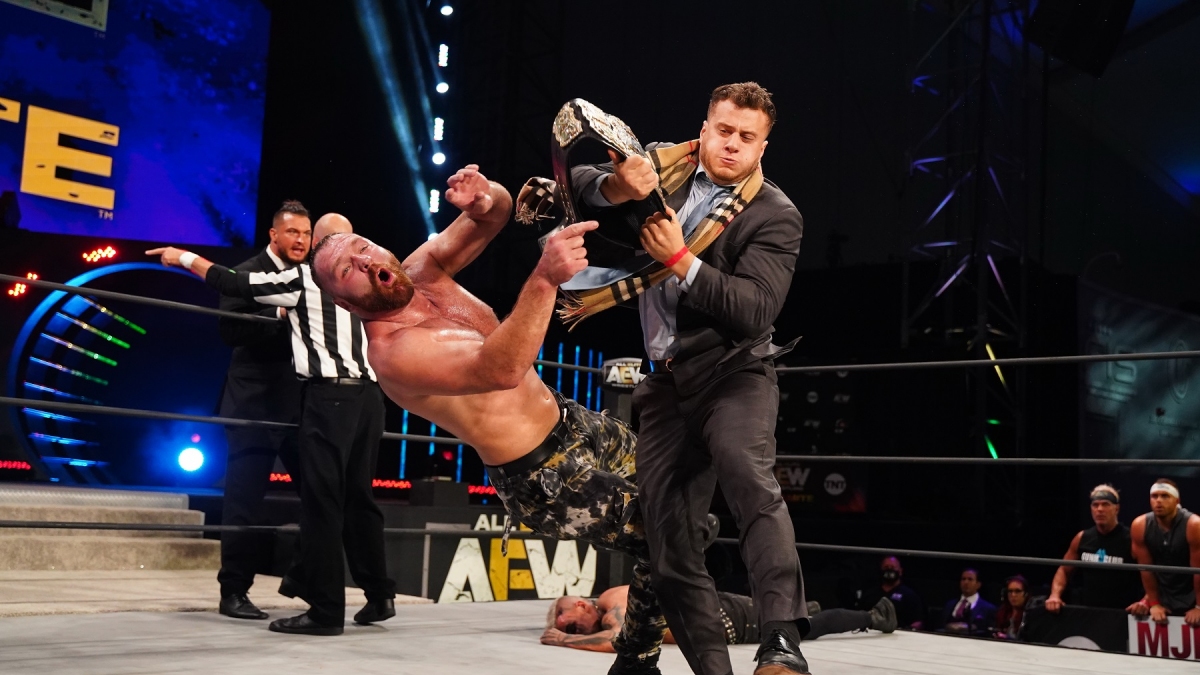 There were some growing pains, but All Elite Wrestling has been able to hold its own during the days of COVID. In their last PPV, Double or Nothing 2020, they played up the situation with what’s probably the best ever use of the cinematic wrestling match gimmck with the Stadium Stampede. Now they’re getting ready for their next big PPV, AEW All Out 2020.

There’s some history behind the name of this PPV. AEW’s prototype show back in September 2018 was called All In, which centered around various wrestling promotions and indie talent working together. AEW officially launched a few months later and around its anniversary they had the first All Out. It gave us the crowning of the first AEW Champion in Chris Jericho, an all-women Casino Battle Royal, the surprise debut of Orange Cassidy, and the first (and hopefully not last) Cracker Barrel Clash.

As we prepare for the new edition of AEW All Out, here’s what you need to know about this year’s PPV:

The show will take place on Sept. 5 at 8pm ET at Daily’s Place in Jacksonville, FL. Presumably, there will be a Buy-In pre-show at 7 pm.

In North America, the show is available on B/R Live. Internationally, you can check it out on Fite.TV.

Since joining AEW, Jon Moxley has been undefeated in singles competition and it helped him springboard to the top and dethrone original champion Chris Jericho. Moxley has defended the title against Jake Hager, Brodie Lee, Brian Cage, and Darby Allin. So far, nobody’s had his number.

But then there’s Maxwell Jacob Friedman. Like Moxley, his win/loss record is virtually untouchable. His only losses have come in battle royals, a four-way, and a tag match. At no point has he been pinned in AEW. With major wins over guys like Cody and Jungle Boy, MJF truly deserves a high-profile shot at the title.

MJF also feels that not only is he needed as champion but as the true leader of the locker room. MJF’s ascent has taken the form of a political campaign. He and his pet muscle Wardlow also tried to get Moxley to lose his title to Darby Allin (presumably an easier opponent to win the belt), but Moxley retained regardless.

AEW ALL OUT 2020 UNOFFICIAL AND LIKELY MATCHES

One of the bigger stories going on at AEW right now is between the tag champions Kenny Omega and Hangman Page, their frenemies the Young Bucks, not-so-trustworthy newcomers FTR, and the malevolent Dark Order. There’s a lot going on with the four parties and it’s hard to figure how it might work out for All Out. My guess is we’re either getting a four-way match (Brodie Lee and Colt Cabana representing the Dark Order) or we’ll have Kenny Omega and Hangman Page defend the AEW Tag Team Championship against the Dark Order while Young Bucks and FTR have their long-awaited dream match.

Big Swole vs. Britt Baker seems almost definite, but it really depends on how healthy Baker is around the time of the match. Due to a bad leg injury, she abruptly had to be removed from Double or Nothing. Rather than hide out and return months down the line, the wheelchair-bound Baker has become an annoying fixture on AEW Dynamite. Eventually, her attitude got the attention of Big Swole, who proceeded to kidnap Baker and throw her into a dumpster. For a while, Swole was banned from the building, but has been welcomed back, ready to get her hands on Baker once she’s able to compete.

Speaking of women, we should be seeing the finals for the AEW Women’s Tag Team Cup Tournament. Broadcast on Mondays on YouTube, the tournament has been based on various women being paired together due to random draw. One of the favorites to hit the finals are, at the very least, the Nightmare Sisters, made up of Allie and Brandi Rhodes.

Cody may defend the TNT Championship against Matt Cardona. The former Zack Ryder popped up in AEW and apparently has a short-term deal. So far, he’s been helping out Cody, but that’s probably going to lead to the two facing each other in some form.

Darby Allin vs. Ricky Starks is likely, possibly in a hardcore match. Allin has had issues with Taz’s proteges, Brian Cage and Ricky Starks. During a tag match, Allin attacked Starks from the top-rope, landing a tack-covered skateboard onto Stark’s bare back. His back torn up, Starks made it clear that they weren’t through by a longshot.

Matt Hardy vs. Sammy Guevara was a match that they were building to since the aftermath of Double or Nothing. Unfortunately, Guevara’s problematic online presence got him in hot water and he was written off TV for a few months. Now they’re back to feuding over Hardy’s belief that Guevara would be better off leaving Chris Jericho and the Inner Circle. Guevara didn’t take kindly to that idea and bloodied up Matt in response.

We could very well be getting some form of Chris Jericho vs. Orange Cassidy. As of this writing, the two are set for their second match on Dynamite, but they’re so high profile and it’s hard to think of anything else for AEW to do for the big PPV.

Check back for more information on AEW All Out 2020 as we learn more!

The Nest Review
Community: Britta Perry Is the Worst, Which Makes Her the Best
Indiana Jones 5 Update: Why Writer David Koepp Left the Movie
Des Episode 2 Review: Nilsen Drops the Façade and Switches Tack
South Park Season 24 To Premiere with a Pandemic Special