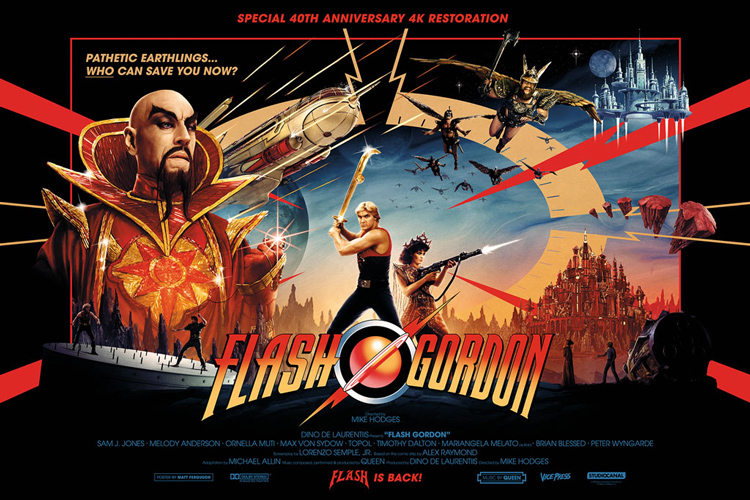 We may have mentioned this once or twice before but this year marks the 40th anniversary of Mike Hodges’ cult classic Flash Gordon! To celebrate Flash reaching mid-life, Vice Press (under license from King Features) will be releasing a set of limited edition posters by Matt Ferguson as well as collectable pin badges and commemorative coin by Florey. Nice!

The commemorative Ming the Merciless coin, designed by Florey, features a gold finish and comes with a full colour backing card and resealable coin capsule. Fans can also celebrate Flash Gordon’s anniversary in style with Vice Press’ four sets of pin badges (below) featuring iconic imagery and representing key moments from the movie, all designed by Florey.

“I’m a life-long Flash Gordon fan, literally,” said Artist and Vice Press Co-Founder Matt Ferguson. “I was born at home during the TV premiere of the film in 1983. So to be able to make the official key art for the 40th anniversary of Flash Gordon is just one of the most amazing things that’s ever happened in my career.

“I’m also overjoyed to be able to sell the poster in all its glory through my own company.”