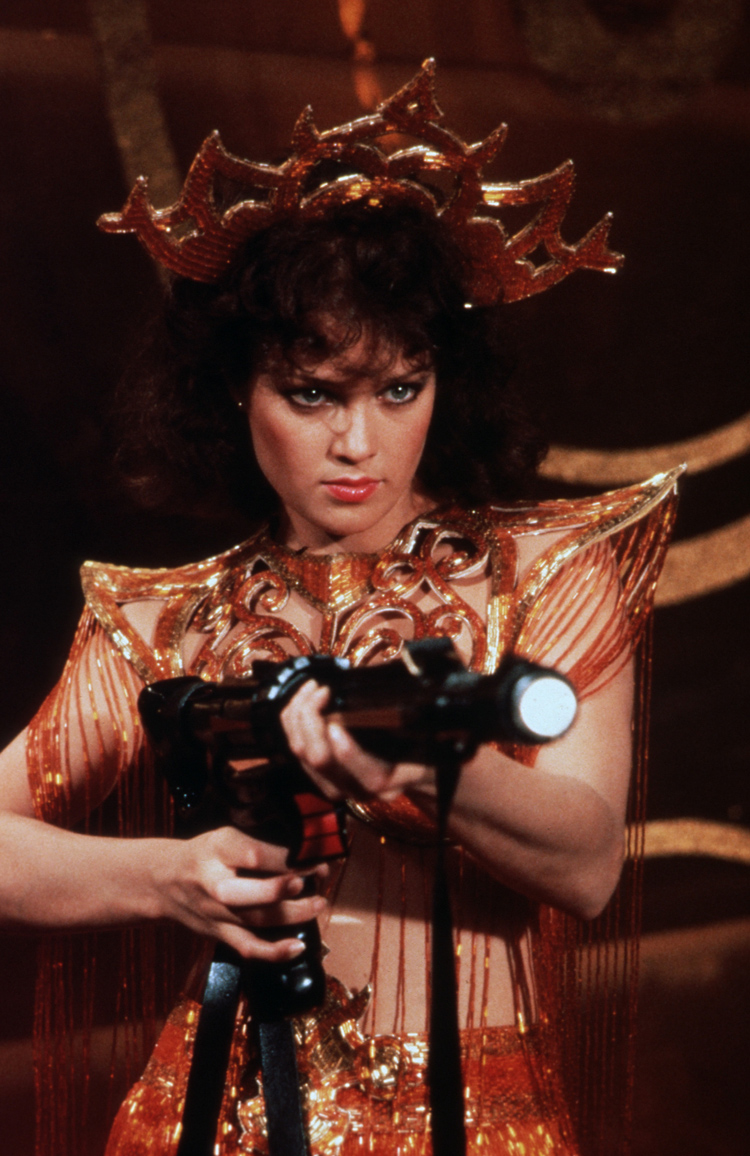 We’re celebrating 40 years of the incomparable Flash Gordon with StudioCanal’s new 4k, Ultra High Definition restoration of the cult classic. And that’s not all! We can see Mike Hodge’s film in all its glory at the cinema in special screenings around the UK and we can take Flash home in a 4K UHD Collector’s edition!

Does it seem strange to revisit Flash Gordon after all these years?

Luckily over the years I’ve done a lot of the comic cons, so I’ve been revisiting it for some time. It’s almost like Flash Gordon has become the Wizard Of Oz of our time because for decades it’s been playing at Thanksgiving and at Christmas. It is a family movie (even though it hits on a lot of different double-entendres), [it has] comic book colours for the kids and it hits a lot of different age groups as well. I was surprised. It took about 25 years for it to come back into my life with all the comic cons, so it’s been great reconnecting with fans, with their children and their children’s children!

How did you get involved with Flash Gordon?

I auditioned for it. It was between myself and another girl who happened to be a really wonderful model, actress and friend of mine, Dayle Haddon, and something happened – which we will never know – and at the last minute I got the call! I was in New York and Dino De Laurentiis let me know I had to leave that evening to fly to London to start shooting the next day! It was like ‘bring on the cavalry!’.

Where in the UK did you shoot?

We were at Shepperton which was really great. We shot it in an airplane hanger. We also, fortunately, got to go out to the Isle of Skye to shoot the beginning which was wonderful. It’s always nice to see something new and get that Scottish energy as well. But it was basically those two places.

I only had a light bag [with me] and, fortunately, I got a last-minute deal for some time off at Christmas to come home to get some winter clothes because, listen, you know it gets cold over here [in the UK] come October/November!

We started shooting in August/September and I didn’t leave until the middle of February so it was a long shoot!

What were your first thoughts on reading the script?

So I read it on the plane and I thought it was pretty fantastic. I could see the lines that were… it wouldn’t work if you didn’t play it dead straight. And that’s the essence of comedy is that everybody’s in on the joke except the character.

The script was brilliant. It was written by a guy named Lorenzo Semple [Jr] who is an American and he got the irony of it and the hint of comedy. So [comedic] lines like “Flash we’ve only got 14 hours to save the earth!” was in his script. [Interestingly] the “go flash go” scene (which happens at the beginning when we go to Ming’s palace) – [the people in that scene] are holding these kinds of Faberge eggs – kind of looking like footballs.

Sam [J Jones who plays Flash] was astute enough to look at that and go “wait a minute, I’m supposed to be a New York Jets guy and they look like footballs!”. So he arranged with the stunt crew a whole kind of football game and I thought ‘well I’m supposed to be the all-American girl so I should be a cheerleader’. So I actually put in the “go flash go” line!

What was it like being on location with all those amazing sets?

The sets were designed by a man called Danilo Donati who had worked with [director, Federico] Fellini. So he had this beautiful vision of his own, very surrealistic, and then combined it with the comic book look. I was just amazed and not just by the sets; the costumes and some of the set designs. We weren’t even nominated for the Oscars – there was a lot of nonsense going on back [then] in America. We didn’t get recognised! But if you look at a movie called Dune, they’re using the same sets that we had on Flash Gordon.

It has its own life because it’s the universal story of good against evil and evil is evil and good is good. And then of course, just the visuals of it are so spectacular, and then the performances: what a group of actors!

What do you think is the secret behind the endurance of Flash Gordon?

I certainly think that without the incredible visuals it wouldn’t capture the eye as much and every single scene is like something you haven’t ever seen before. It’s very original in that way. And again I think the incredibly talented cast. You [also] got to say something for Queen. That Queen music – thank you Brian May!

You have one of the most iconic speaking lines in a song with Queen’s ‘Flash’ – what was that like? Did you record the song’s line separately?

No they just took it off from the film, there was no re-recording or anything. I had no idea I was going to be on it!

That must have been a shock when you heard the song!

I know! Somebody sent me an album and I was listening to it and go “isn’t that nice”, and then I hear my voice and go “wait a minute, where’s my residual?!” haha!

Flash Gordon has a great balance of cheesiness and earnestness…

Yes cheesiness is a great word but also sweetness and innocence. I think that’s another thing that’s endearing about the movie, is that Sam and I come in as the two innocents into this dark, evil world of corruption and to watch that innocence come up against all this manipulation and craziness. It’s kind of funny watching us go through stuff going “oh wow gee, how did that happen!”.

The movie still holds up even today…

It does, it’s like comic books and all those Marvel characters, you know they’ve been around [a long time] and that concept is something fantastical. We all want to believe there’s something out there that’s going to actually take care of us in this mad world of evil and darkness. And that’s the appeal – that hope, peace. That somehow the good people will win.

[Genre films are] getting a little darker I think, certainly with a lot of these X-Men things but it’s a dark time and I think it reflects that. Whereas Flash Gordon was so basic and understandable and the writing was so clever because it hit every age group. It’s just like a fun goof, but brilliantly organised, brilliantly acted. And, of course, brilliantly directed by Mike Hodges; he gave us a lot of room as actors to create things. I’ll always be grateful for that because you know he let me use that “go Flash go” line throughout the whole picture!

You’ve been in a few genre films…

I started off doing Logan’s Run and I did a Battlestar Galactica on television. But Flash Gordon was the big sci-fi movie for me. And then, of course, I did a horror genre film and then most of the other ones were a lot of movies for television and TV series. I had a good 15-year run [being an actor], I was very fortunate.

What are your thoughts on audiences being able to see the film again on the big screen?

Because it’s such a big-screen movie it’s best to see it on a big screen. So I think people are going to have a wonderful adventure and just escape from this madness of this world right now. It is a great form of escape and I hope – I know – they’ll have a wonderful laughing time and just relax our brains a little bit during these difficult days!

We couldn’t have said it better ourselves! Flash Gordon is out at selected cinemas now and will be released on 4K UHD Collector’s edition, Blu-ray, Steelbook, DVD and digital on 10 August 2020.