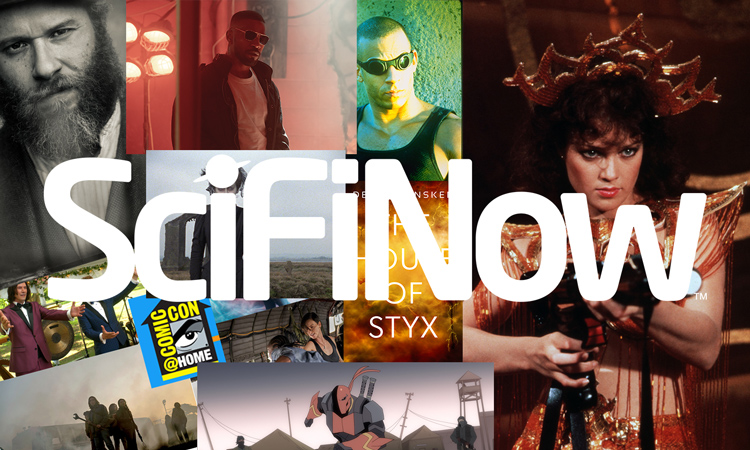 The summer may mean a lot more time being spent outside in parks and on beaches. But that doesn’t mean we can’t get in a good few hours of indoor genre entertainment, and boy August is going to be a scorcher (get it? With the heat and sun and… oh well…).

We also have a lot of exciting genre goodness here at SciFiNow this month. For those out there up for visiting cinemas, this Friday sees the release of An American Pickle, starring Seth Rogan. Written by Simon Rich and directed by Brandon Trost, the film follows Herschel Greenbaum who falls in a vat of pickles and is brined for 100 years. Make sure to head back here this Friday for our interview with Rich and Trost to figure out just how this story came about!

Wanting a retro cinema outing? Why not head to the cinema to see cult classic Flash Gordon? The iconic film has had a new 4k Ultra HD restoration and it looks amazing. We spoke to Dale Arden herself, actress Melody Anderson about 40 years of Flash right here.

Speaking of retro – we have a couple of absolute classic home entertainment releases coming up this month. For those in need of a good fright, why not visit the original 1989 TV film The Woman In Black starring Adrian Rawlins? The movie still holds up today (trust me) – but if you have an aversion to paying for films, enter our competition to win a copy of the Blu-ray alongside a very cool sign for the fictional town that it’s set in, Crythin Gifford! We also sat down and spoke to Rawlins about starring in the horror classic, which will be published this Friday.

Want more of a retro sci-fi feel? Well you can’t get much more sci-fi than Pitch Black – Arrow Video will release a special 4K Ultra HD edition of Pitch Black on 17 August and we spoke to the film’s director David Twohy about the film, Vin Diesel and whether there will be another film… check back here on 14 August to read that revealing interview.

For something a little newer, this month sees the release of Netflix’s amazing Project Power. Starring Jamie Foxx, Joseph Gordon-Levitt and Dominique Fishback the movie focusses on a new drug that has the ability to make you powerful for 5 minutes – but you don’t know what power you’ll have. You could be super strong, but you could also blow up in a ball of flames… we spoke to directors Henry Joost and Ariel Schulman about the gritty sci-fi – make sure you visit here on 12 August to hear what they have to say.

DC is also releasing some more brilliant animations this month with Deathstroke: Knights And Dragons (out now on digital and out on DVD and Blu-ray on 17 August) and Superman Man Of Tomorrow on digital on 24 August on Blu-ray, DVD etc on 7 September.

In regards to series, we have Lovecraft Country coming out on 17 August and if you managed to check out their panel for SDCC @ Home then you know we’re in for a treat with that one! Also, if you haven’t had the chance to binge The Umbrella Academy or Doom Patrol yet, make sure you do so!

We also have you covered for this month’s exciting book releases! The Space Between Worlds, All The Stars And Teeth and The Hollow Ones are all out now. We sat down and spoke with The Hollow Ones‘ co-author Chuck Hogan who wrote the novel with the one and only Guillermo Del Toro – check back here next week to read that interview and find out what it takes to write with a movie legend. Looking further ahead, Derek Künsken’s epic space opera The House Of Styx is released on 20 August – check back here soon to read our review of the novel as well as our interview with the author.

Summer also means festivals! And although Covid-19 has meant they’re not quite the same this year, we still have some great genre festivals lined up in August. Not only have we just had the fantastic SDCC@Home (make sure you take the time to watch the panels, they were truly brilliant), but both Fantasia (20 August-2 September) and FrightFest (28-31 August) are having digital editions this year! I can’t wait to settle down with a plethora of snacks to see some of the latest and most exciting films out there…

That’s not all we have lined up for you this month. Make sure you keep updated on everything genre by following us on Twitter and Facebook. Now where are those snacks…?