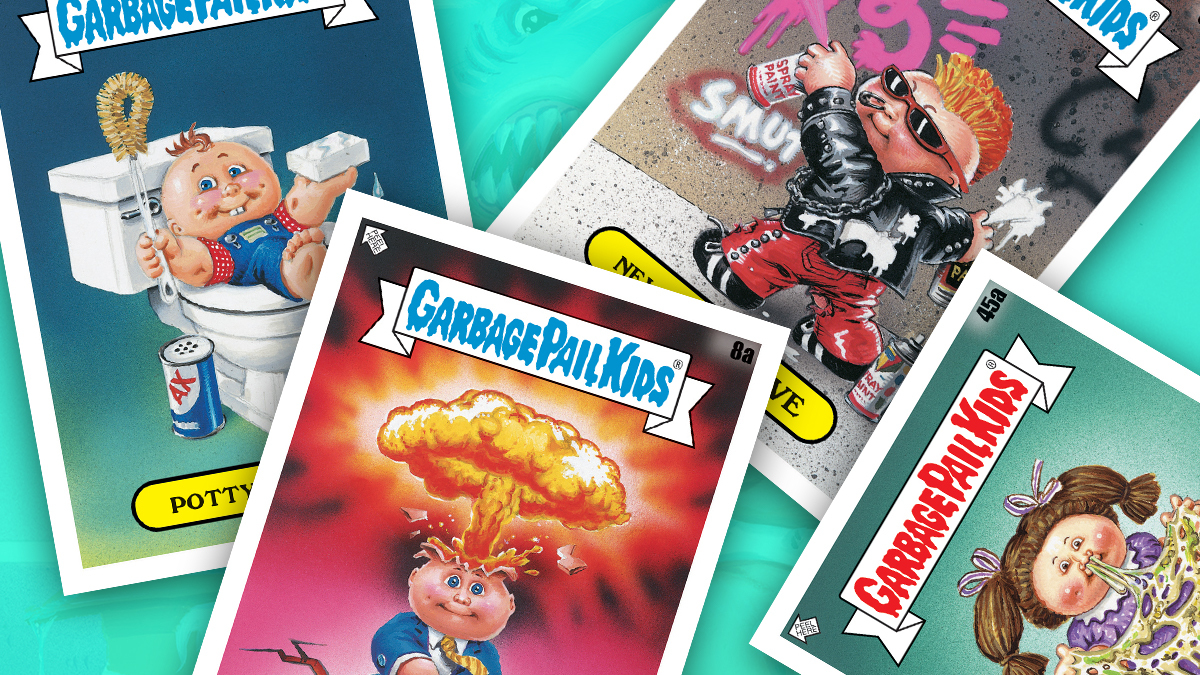 This story appears in the Den of Geek x eBay special edition trading card magazine. Op-ed by Brian Volk-Weiss, creator of The Toys That Made Us and The Movies That Made Us.

The beginning of my adventure with collecting cards was, as with so many things in my life, due to Star Wars. When I was very young I was enthralled by everything about a galaxy far, far away, but we didn’t have a lot of money for the toys.

Even so, at the start of the Star Wars hysteria, there was a real dearth (to use a fancy word) of merchandise. Even if you could afford a Millennium Falcon, you might not be able to find one. But you could find the cards, and they were affordable. I’ll never forget those first ones I had, with the blue background and the little white dots. Then there were the green ones, and while for some inexplicable reason I don’t have distinct memories of The Empire Strikes Back cards being in my grubby hands, I was blown away when Return of the Jedi cards hit the shelves. Their vibrant red borders made them seem like they were all Time magazine covers! There was Jedi Luke looking at his hand, Luke talking with Princess Leia, and R2-D2 throwing off a shower of sparks when he got shot trying to break into the Endor bunker—those cards spoke to five-year-old me in a very profound way. Their impact can’t be overstated.

We were living in a world where there were no DVD players, and even VCRs were still a little ways off. Collecting those cards enabled me to relive the movies in my head. I know it sounds like a cliché, but I really do remember sitting in bed, huddled under my blankets with a flashlight, going through a huge stack that my little hand could barely hold (no, that infamous C-3PO card with an apparently erect penis was not one of them!). I’d flip through the green ones, and the blue ones, and as I did the movies unspooled in my mind. They were magical, and they were precious to me. I still have some.

The next step on my card collecting path began in the schoolyard at PS 144 when I was in the fourth grade. A bunch of my fellow students were hovering intently around something. I went over to get a look and discovered that they were focused on a bunch of cards. My interest immediately waned. Never a sports fan, as I got older I associated cards with baseball and football and all the games that had never managed to hold my attention. In my mind, my beloved Star Wars cards were the exception to the dullness of cards as a rule.

But as I got closer I saw that these were different. They were brightly colored and depicted what, in my estimation, appeared to be crazy cartoon characters. This was my introduction to Garbage Pail Kids. And like every other kid my age at the time I got very excited and immediately informed my mother that we needed to start buying Garbage Pail Kids cards in bulk!

Such cards were often referred to as “trading cards” but that term really didn’t apply to my Star Wars collection. My friends and I collected them, but we never actually traded them. Garbage Pail Kids were different—we did actually trade them. I vividly remember, despite the fact that it’s been 35 years, giving up something in the range of a dozen cards in exchange for a Nasty Nick card, designated 1A. Now to put that in perspective, when this card was offered to me in a trade my reaction was the same as it would be if someone entered my office now and offered me a trade for the actual Mona Lisa—a Nasty Nick 1A was serious business.

A quick aside: I always found it funny that Garbage Pail Kids had cards designated 1A and 1B— each featured the same artwork, but carried a different name. They were obviously trying to have twice as many cards for the same amount of artwork. From a business standpoint, you can’t argue with that logic. From a collector’s point of view, as well as a little boy’s, the double designation was really cool because it meant you had the chance to collect 200 cards instead of 100—it made the hunt that much more exciting.

Today, my involvement with trading cards continues. I am in the fortunate position of partnering with my frequent collaborators Brian Stillman and Kelley Slagle on a new documentary titled Igniting the Spark: The Story Of Magic: The Gathering. At the start of the process I knew next to nothing about the topic, but Brian Stillman kindly introduced me to its intricacies and now I am spellbound (pun intended!).

Despite never being good at them, I’ve always been intrigued by mathematics, so I have become enthralled by Richard Garfield, the creator of Magic: The Gathering. He first envisioned the game back in 1991 while he was a doctoral candidate in combinatorial mathematics. The documentary will be a deep dive into the history of Magic: The Gathering. As anyone who has seen The Toys That Made Us and The Movies That Made Us knows, I am extremely interested in the human stories behind all of these cultural phenomena.

Magic: The Gathering’s story is an amazing one—what literally began with homemade cards became the most profitable game on the market, ultimately becoming so successful that it even wound up purchasing its precursor, Dungeons & Dragons (apologies to all the Owlbear fans out there!). Being a part of this project has been a pleasure, and learning how Richard Garfield’s initial idea has blossomed into a multi-billion dollar industry has been an amazing journey.

Being a small part of Igniting the Spark: The Story Of Magic: The Gathering makes me feel like I have come full circle. What started off as an obsession for Star Wars cards and transitioned into an infatuation with Garbage Pail Kids—I still have my Nasty Nick and my disgusting, despite its good name, Brainy Brian (I don’t have, or want, the really bonkers Fryin’ Brian)—has culminated in this documentary about the most successful card game of all time. They say you shouldn’t make predictions, but I’ll go out on a limb here—just writing this foreword has renewed my interest in cards so much that my wallet will soon be feeling some pain.