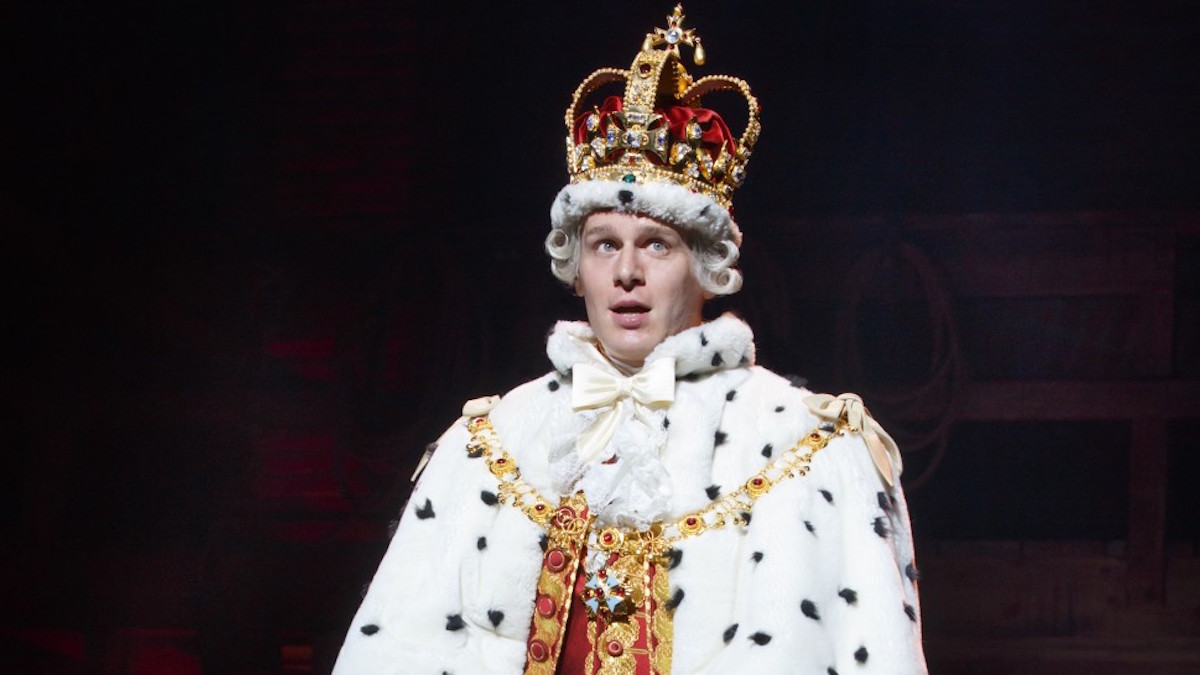 It never fails to get a laugh. Whether live in the theater or at home on Disney+, the bristling energy of Lin-Manuel Miranda’s Hamilton comes to a sudden halt the moment King George III makes his pompous entrance. Draped in a red, white, and gold mantle, and trapped beneath a sparkling crown, he looks like an oil painting that’s been shrunk on a postcard—and a perfect satire of British monarchy.

I didn’t have the pleasure of seeing Jonathan Groff perform King George III live, but I giggled all the same at every stammering outburst in the three variations of the song “You’ll Be Back,” a fawning ballad fit for 1970s pop radio, save for the moments where George laughs maniacally. It all makes for a merciless sendup of the monarch remembered for being crazy, even in the UK where on playgrounds he’s recalled as the “Mad King Who Lost America.” But why exactly was he “mad” and what did it do to his reign? While no one knows the exact cause for sure, there are theories—even as he ruled over a relatively successful period of time… if one ignores his distinctly American problem.

During his lifetime, George III presided over multiple moments of change and upheaval in the British Empire. In addition to being the first monarch to see colonies forsake his crown, he also came to power when the British Empire reached unparalleled heights. He was there to declare victory in the Seven Years’ War at the beginning of his rule—the conflict started before his time during the reign of grandfather George II—and essentially claim supremacy over France as Europe’s greatest colonial power, including in North America where the western most region of the global conflict is remembered as the French and Indian War. He also saw the unification of Ireland and Britain, thereby becoming the first monarch of the “United Kingdom.” And he was there when France fell into revolution, and then embraced the imperialism and world conquest of Napoleon Bonaparte. Technically, he was even king when Britain had its shining moment at Waterloo, defeating Napoleon for good in 1815.

But by that period in his life, George III was only nominally king. With his son reigning as Prince Regent—hence the period being remembered as the Regency era—George wandered the halls of Windsor Castle, not knowing at points that he was king. Despite being the then-longest ruling monarch in British history (and still the longest-ruling king), the end of his reign was marked by infamous incidents like the Christmas of 1819 where he ranted about “nonsense” for 58 straight hours, or being unable to comprehend in his blindness and near deafness that his beloved wife died in 1818. The final decline over the last 10 years of his life can be attributed to dementia, but there is some debate about what afflicted George in his youth… and when it actually began.

Arguably the first fit of “illness” occurred in 1765 during growing tension with the North American colonies. At the time, the king considered himself to be a friend to the colonists. After the French and Indian War, George’s Royal Proclamation of 1763—which forbade westward expansion—was for the colonists’ benefit, as the crown saw it, so as to prevent conflict with Indigenous Native American tribes. The Stamp Act levied on all printed paper in North American colonies was also at a smaller rate than the taxes on the West Indies colonies, or the taxes paid in general by British citizens in Europe.

Of course colonists didn’t see it that way. Not when there was taxation without representation in Parliament—and not when a required British stamp would therefore be a discrete form of approval over what kind of newspapers were printed and by which kind of colonists. Rejection of the Stamp Act came around the same time George is first recorded displaying a fit of mania.

After the episode passed, the king would replace George Grenville with Charles Watson-Wentworth as prime minister, and therefore soon repeal the Stamp Act. But not long afterward, Parliament had the bright idea to save its British East India Company monopoly—which had too much tea sitting in London warehouses—by forcing North American colonies to only buy East India tea and enforcing a new parliamentary tax on it. As George himself explained, “It was one tax to keep up the right to [tax colonists].” Along with a list of other grievances, it also inspired the Boston Tea Party in 1773.

The resulting tensions, including most infamously the Intolerable Acts, which attempted to punish all of Massachusetts for the crime of a few by shutting down the colony’s charter, Boston harbor, and letting the British government appoint all members to the upper house of the colony’s legislature, eventually gave way to war. But even after the firing started, George exacerbated matters when he refused to hear the Second Continental Congress’ Olive Branch petition, which in 1775 attempted to explain colonists’ grievances. The American messengers were given an official response that “his Majesty did not receive it on the throne, no answer would be given.” Rather George preferred declaring the colonists to be traitors in open rebellion.

He got to meet one of them face-to-face, too, after the war. As referenced in Hamilton, George met with John Adams exactly once when the volatile New England lightning rod—who’d spent years demanding the Continental Congress declare independence—became American Minister to London. George told Adams, “I was the last to consent to the separation.”

However, during this entire period of his life, that includes two of King George’s three satirical interludes in Hamilton, the only major bout of well-known illness (or “madness”) was the one from 1765. Yet he began a steady decline after the American Revolution. In 1788, he’d retreated to Gloucestershire and an episode of illness began that quickly spiraled out of control for months—including incidents of George speaking non-stop for hours at a time, to the point where he’d begin foaming at the mouth and losing his voice. Rumors about “Mad King George” also began circulating from this era, with one spurious claim suggesting he shook hands with a tree, convinced it was the king of Prussia.

The most common explanation among modern scholars for these episodes, which continued to multiply until the point of mental incompetence in 1810, is that he suffered from hereditary porphyria, which is the name for a variety of similar genetic diseases that see symptoms periodically occur for a short period of time. The episodes can be brief, but the symptoms can be rapid, aggressive, and violent, affecting both the skin and nervous system and resulting in abdominal pain, chest pain, body aches, vomiting, constipation, and blisters. They can also trigger seizures and paralysis.

The primary reason historians drifted toward this diagnosis in the 20th century is that among other noted events by the king’s physicians—including how he needed to be restrained by pages sitting on his chest while he was held on the floor—is that he excreted blue urine. With the hue being one of the symptoms caused by porphyria, many have hypothesized that it is what ailed George. Playwright Alan Bennett even wrote a play about it titled The Madness of King George III. Ergo, George’s “madness” was a physical genetic ailment as opposed to a mental illness, one possibly caused by arsenic, as high levels of the poison were found in strands of George’s hair during a 2005 examination. It is possible he used it for cosmetic makeup.

However, other recent scientific research seems to argue that George instead suffered from bipolar disorder.  A research project based at St. George’s, University of London counters that George really suffered from a mental illness that went undiagnosed in the 18th and early 19th centuries. This is based on the study of thousands of George III’s handwritten letters. By analyzing his use of language, the researchers concluded his vocabulary was more sophisticated, and his sentences much longer, when he was in the fit of one such episode. According to Dr. Peter Garrard and Dr. Vassiliki Rentoumi, via BBC, it was common for George to write 400-word sentences with only eight verbs. Like his long and frantic conversations—to the point of foaming at the mouth—these traits may suggest a manic moment in what psychiatrists now diagnose as bipolar disorder.

The researchers argue that porphyria is also not the only explanation for George’s blue urine. His medical records show that he was given medicine based on gentian, a flower still used today and that features deep blue flower petals that may affect the digestive system.

Whatever the cause, the results were bitter, with George suffering from cataracts and rheumatism when he surrendered his crown in all but name to his son in 1811. At the time, George and contemporaries believed he was suffering grief over the death of his youngest daughter. The late princess’ nurse recalls seeing “scenes of distress and crying every day… [that] were melancholy beyond description.” But after the Regency Act of 1811, George’s health never improved and definite signs of dementia set in. He died on Jan. 29, 1820, six days after the death of his fourth son.

It was an ignominious end to a king who began his reign with a victory over France and an expansion of his empire. But thanks to Hamilton, that early confidence—and firm assurance that the American colonists would return to British arms, penitent and contrite—has been given a new kind of immortality.