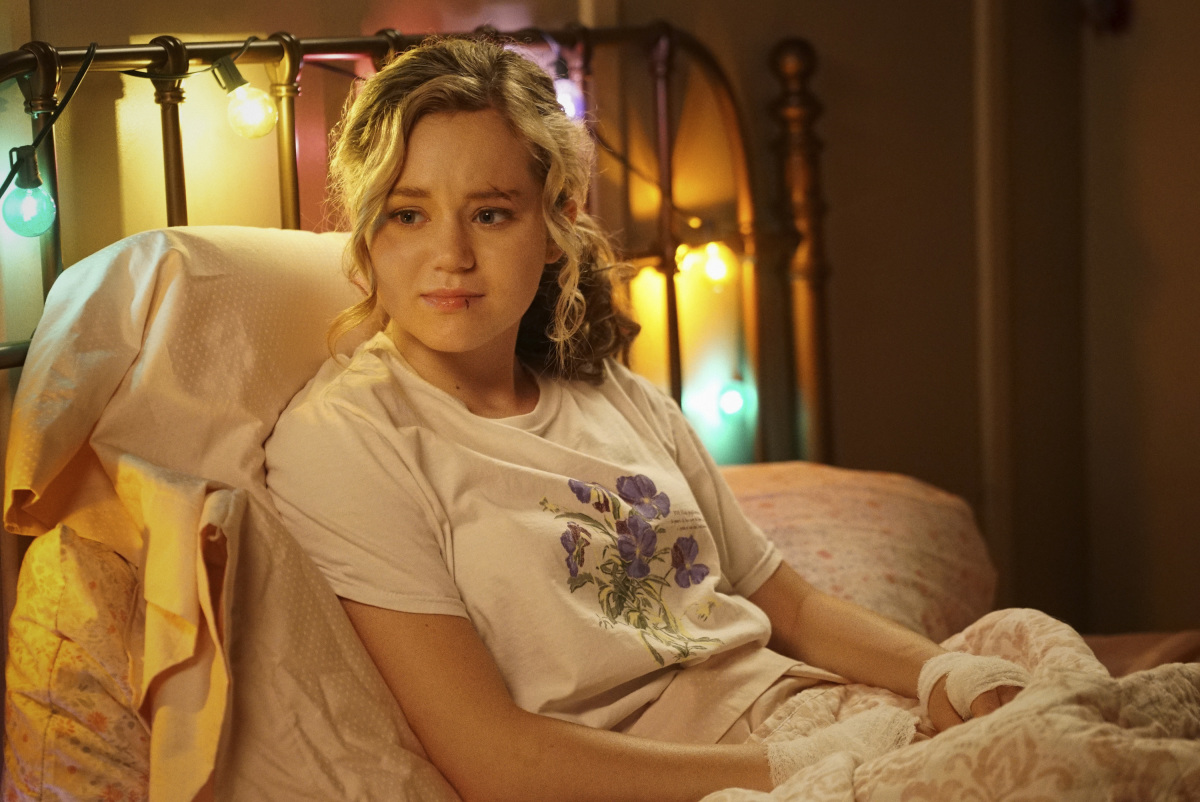 Stargirl continues to prove it’s the best thing happening in superhero television right now, by following up its best episode of the season with an installment that’s every bit its equal. “Shiv Part Two” also manages to avoid many of the predictable tropes and narrative traps that too often plague this genre, blazing a new and intriguing path for the remainder of its first season.

In so many other shows like this, the secret of Courtney’s identity would have been dragged out for weeks, as we all wondered what Cindy might or might not know. Or, alternatively, we’d be asked to suspend our disbelief and pretend that despite Courtney’s very obvious hairdo and the fact that she fought her up close, Cindy somehow didn’t realize who she was. Instead, Stargirl goes in the completely opposite direction and brings the girls face-to-face again almost immediately.

“Shiv Part Two” is positively relentless in terms of its pacing and story revelations. Cindy knows Courtney’s secret identity! Henry’s powers finally manifest themselves! Beth is actually a capable team leader! Henry now also knows Courtney is Stargirl! This is an hour in which almost every character is given something significant to do, and multiple key emotional moments unfold throughout. It’s honestly wonderful, and I’m thrilled at what it all could mean for the rest of the season. (And for Season 2, now that we know the show’s been renewed!)

Thanks to her face-off with Cindy last week, Courtney spends most of the episode sidelined at home, a twist which sends Pat and the rest of the JSA off on their own mission. (We’ll get to that in a bit.) Yet, the hour’s best moment is undoubtedly the tension-fueled sequence in which Cindy herself arrives at Courtney’s house to eat chocolates, commiserate over her car accident and apologize for overreacting to her desire to go to the dance with Cameron. In more of the sort of narrative doub

Yet, some of her comments, particularly her delivery of “I just really need a friend right now” is almost enough to make viewers hope that she doesn’t know the truth, and that these two girls can somehow grow to be friends even as they’re busy fighting one another as enemies. Of course, that dream is dashed by Cindy’s epic exit in which she not only confirms she knows Courtney is Stargirl but promises to kill all her friends.ling this show is so great at, this scene is simultaneously terrifying and strangely compelling, as we all (including Courtney) wait for Cindy to either attack or reveal what she knows.

Actress Meg DeLacy really is doing the most with this role, leaning into the strange dual space that Cindy occupies, as a teen who knows too much to enjoy the world she’s living, but who is still too young for her father to take seriously as a proper villain. And the brief view we get into her mind thanks to Henry’s burgeoning powers once again shows us a girl who is simultaneously vicious and violent, and one who desperately wants someone to fight beside her. Even if it is Henry, who we already know she doesn’t actually like very much.

Stargirl continues to hint that there’s still more to Cindy that we don’t yet know, again showing us her apparently endless healing abilities, and referencing the tragic death of her mother. (Which Cindy appears to have been at least somewhat responsible for.)

Henry’s discovery that she was in fact specifically charged with keeping an eye on him by both of their parents will likely help us dig further into her backstory, and may finally help make the younger Brainwave an interesting character in his own right. He hasn’t had much to do in the series thus far, beyond being a generally disgusting human who shares his girlfriend’s nudes with friends so he pretty much has nowhere to go but up.

Elsewhere, Luke Wilson continues to prove he’s the stealth MVP of this show, stealing our hearts with every scene. Was his best moment this week his insistence that his wife deserves to know the truth about his and Courtney’s secret superhero lifestyle? The bit where he wrecked his beloved Buick to give his stepdaughter an alibi for her injuries? Or the scene in which he had to pretend to be Beth’s dad and endure being sexually harassed by Bobbie Burman on a JSA mission?

While those moments were all great – please Stargirl gods give us more scenes of Wilson and young actress Anjelika Washington together, they’re honestly hilarious – the true winner has to be Pat’s solo heart to heart with the Cosmic Staff. Bonus points to Wilson for acting so well opposite an inanimate object, but Pat’s plea to the sentient stick to take Courtney away from danger once in a while rather than toward it, was heartfelt and moving. Their relationship really is the best, and this hour really cements their status as teammates as well as family.

Happily, Pat seems to be accepted as a JSA member by everyone else this week as well, even as he crashes Beth’s plan to infiltrate the Burman household. It’s nice to see the rest of the team working together without Courtney present to force them to do so, and even if Rick’s pointless anger still feels a little much for me, this hour still gave Beth a real chance to shine on her own. (And we will always stan a relatable queen who turns around and nopes out the minute an unidentified growling monster that I suspect is just Solomon Grundy in a cage appears. Be more like her, rest of the JSA.)

Honestly, the only let-down of “Shiv Part Two” is that neither Courtney nor Cindy mention the arrival of Justin the Janitor and his big medieval sword at any point. Do they not remember? Were they somehow both unconscious? If so, who does Cindy think knocked her out?

May the force be with you: Detecting ultrafast light by its force
Deathstroke: Knights & Dragons review
Editor’s Note: August 2020
Ava DuVernay to Take One Perfect Shot for HBO Max
The 100 Season 7 Episode 10 Review: A Little Sacrifice