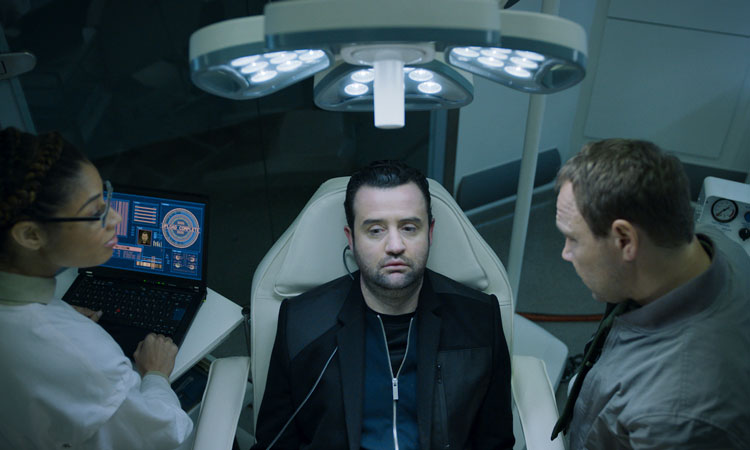 How did you get involved with Code 404?

It’s written by Daniel Peak who’s a really good comedy writer so I said let’s give it a read and I just thought it was absolutely hilarious as soon as I read it. I could instantly visualise myself doing it, it just leapt off the page. Then I sat down with the producers and said ‘look yeah I love it let’s attach me to it’.

Then when I was at that meeting I said ‘who have you got for the other character, the Roy Carver character?’ And they went it’s still early stages so I went ‘listen I’m very good friends with Stephen Graham, we worked together over ten years ago…’ I just thought of Steve for that role and they said that would be amazing, so I phoned Steve, sent him the script. He loved it because he’d come off the back of Line Of Duty and The Virtues and he’d done a lot of serious acting – as had I – and it was just a great opportunity really for us to both to have a 180 degree turn and do some comedy together. It was just an absolute joyful shoot and we had an absolute blast on it. It was a great experience.

How do you go about choosing a role?

Whenever you’re picking any project it’s always first and foremost about the quality of the writing against all the other components, like who are the other actors? Who’s directing it? Is it a character I’ve not tried before? So yeah it’s a whole factor of different things. I’m always so appreciative when someone picks up the phone up and offers you a script straight away. I guess Code 404 was different in that they wanted me to attached myself and use my name to get other talent involved in it. It was somewhat of a different experience for me that!

How would you describe your character DI John Major?

He’s a maverick cop. He’s the best policeman in the unit. He kicks down all the doors and he’ll do whatever it takes to get a confession but he’s egotistical. He’s always described as a bit of a knob by Roy. But the fact that he’s come back part man, part AI and the wirings wrong – it’s like he’s even more of a knob! All of those brilliant natural police instincts that he had before he got killed have gone awry and he can’t quite figure out why he’s not a Supercop anymore. He just makes the wrong decisions and gets himself in these ridiculous situations; he’s completely hapless but that was the joy of it.

We always described [Code 404] as a mismatch of Some Mothers Do Ave Em and Robocop! It was great. In terms of Roy and Major; they’re classic double act. I’m the comedy man and Stephen’s character is the straight man. That partnership within comedy has been there through generations and generations, so it was just a great double act and we really enjoyed bouncing off one another.

Was there much ad-lib when you were shooting?

There were a couple of ad-libs now and again but the thing is the quality of Daniel Peak’s writing is so great you didn’t really want to tinker with it too much. We had a great director in Al Campbell who has had his own world of comedy jobs; he knows his onions so it was just good to play with it a little bit but not change it all that much. You have to honour the writing and some of those one-liners were absolutely hilarious. The Oscar Pistorius line and all that stuff it was just comedy gold. As soon as I read it my first instinct was to be laughing out loud with it so I wanted to hold on to that.

There are many versions of Major in the show – human Major, Supercop Major and – as people around him call him – the ‘slightly shit Major’. Which version of the character did you prefer?

I love playing the shit Major, without a shadow of a doubt The shit major is the funniest. But it was a very interesting exercise in that [spoilers!] last episode to play him completely straight and to be the Supercop that the technology wanted him to be. He’s very interesting in that episode – I think the channel [Sky] was quite worried that all of a sudden it became this high-end serious drama because there weren’t many comedy laughs in that episode.

The only funny moment – and this is a happy accident – is when they’re in the police station and they’re in that room with all the evidence, and he finds that camera in that pencil and he breaks it and I have to leave the room. And where we were filming, in that particular location the door kept locking. So you had to have a fob to open that door. I did the whole scene in a wide [shot] and it just so happened that no one had triggered the door to open! But I stayed in character and I asked Roy for the fob to let me out. And we kept it in the show as the only real laugh-out-loud moment in that episode. I love it when happy accidents like that happen when you’re on set. But definitely shit Major is the one I loved playing.

It was shot in a university somewhere. The exterior was a university campus but the actual interior was shot in Angel. It’s an underground space on Essex Road and it was meant to be an underground theatre. This millionaire had bought this space for his wife to convert it into a space like Shakespeare’s globe, like a theatre in the round. But I think he either passed away or the money fell through and it’s now just this derelict disused space. A lot of the time you end up filming in the same locations over and over but I’d never seen this place before and it was brilliant for our show.

When we first go into [the police station] they used this brilliant drone company to do this drone shot of when we first enter down the staircase. But what was funny about that was when they tested it on the first take, the drone was obviously creating all this wind and stuff from the propellers, and all of the paperwork on the desks were blown away! So they had to stick all the paperwork to the desk which really made me laugh. It’s a great location.

I can’t remember where that coat’s from, but Louise (Allen) our brilliant costume designer modified it and stuck plastic plates on it and things like that. The great design of 404 is that it was set in the near future and [there were] all those little touches to people’s costumes. All that sort of stuff was brilliantly realised to make it all very believable. I look forward to plugging in that USB lead in my neck again. And pulling on that coat! It’s going to be weird going back to it after lockdown. I have to say. I’ve got to get back in shape…

Congratulations on Code 404 getting a second season. Where do you want to see Major going in the next season?

It’s all to play for! We still haven’t resolved the whole love triangle issue with Major’s wife. Also, the conspiracy thriller and we haven’t fully realised who The Juggler is. That’s the beauty of this script – it had brilliant comedy in it, it had a conspiracy thriller in it and it’s also very much a relationship drama centred around that love triangle.

Obviously we have to resolve the fact that Major has been upgraded to a Supercop so we’ll have to somehow make sure that he becomes a shit policeman again otherwise it won’t be fun to play. I don’t know, I leave it all in the capable hands of Daniel Peak and if the scripts are half as good as the first series I can’t wait to play the character again.

What’s next for you?

The next thing will be second series of Temple with Mark Strong which I’m really excited about. Again I can’t think of a better ending than that first season; that last episode just left it all open! I’m really looking forward to playing that because I loved playing Lee Simmons alongside Mark Strong. Then it’ll probably be Code 404. And then obviously we’re all waiting with bated breath until White Lines gets commissioned again. White Lines has been incredible – it’s been a huge audience pleaser and a global hit. It’s gone all around the world!