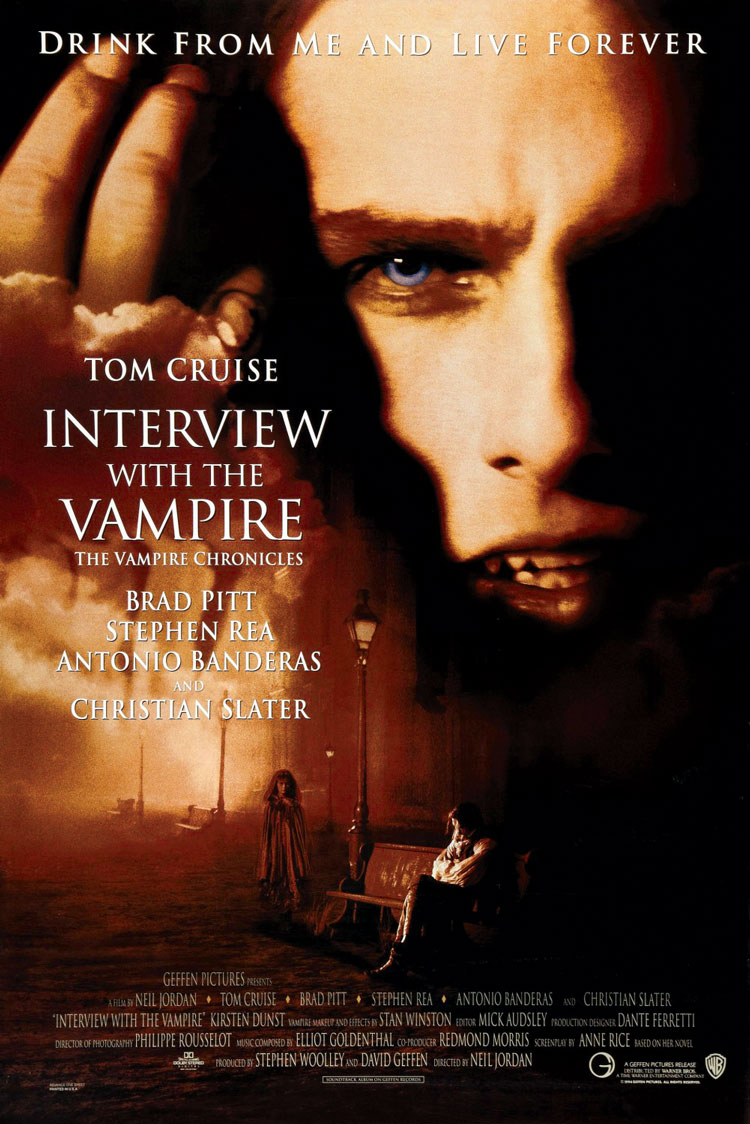 “She removed all of that Hammer Horror, tongue-in-cheek stuff – it was marvelous. I just wanted to make the best version of her book that I possibly could.” 25 years on, it’s clear that Jordan’s transformation of Rice’s text from the page to screen marked a key moment in the visual history of cinema vampires. Gone was any trace of neck-biting campiness – and in its place was a down-to-earth credibility that only a director like Jordan (who had previously helmed grounded indies like Mona Lisa and The Crying Game) could bring.

The story’s gothic depiction of unrepentant night creature Lestat de Lioncourt (Tom Cruise) and his cursed-with-a-conscience apprentice Louis de Pointe du Lac (Brad Pitt) explores a wide variety of issues relating to existence, each through a dark lens. From humanity and barbarity, right down to the bloody point of it all, Rice dances with the macabre as her ageless antiheroes endure the challenges of eternal life. “I’d heard about the book for years but I’d never read it,” Jordan tells us. “I read Anne’s script, then the novel itself and I just fell in love.” With his interest piqued, the director asked to take his own pass on a script Rice had already penned in order to polish a few of its more human themes. “Guilt,” admits Jordan on what initially drew him in. “I loved the way Anne isolated Louis’ sense of eternal guilt. It was extraordinary. He was half-human and half-vampire but he never quite lost his human element and perspective,” he adds. “That’s what I liked about it and that’s what I tried to do the movie about.”

With his vision set, Jordan’s first task was casting his perpetually youthful leads. With hindsight, it’s hard to imagine anyone other than Cruise and Pitt donning the 18th century threads of Lestat and Louis – however back in 1994, both fans of the novel, and Rice herself – had other plans. “There were all these fans who had their own idea of who Lestat could be,” remembers Jordan. “There were a host of names mentioned for that role, among them Daniel Day Lewis and Rutger Hauer. I saw Lestat in Tom in everything but his height. Anne’s conception of Lestat was a tall, blonde, Nordic type,” he reveals. “Tom was a teen idol at the time but he could do far more than that. It also struck me that his own situation in Hollywood – being this enormous star, yet living in gated privacy, was not too dissimilar from the way Lestat was described and I felt there was some correlation between movie stardom and vampirism – movie stars strive to be eternally young and mysterious. I thought Tom was an extraordinary actor and could do something with this role that we hadn’t seen him do before,” says Jordan. “It was a risk – but one that was really worth taking.”

As for Cruise’s co-star, the role of Louis required some emotional heavy-lifting: “I met with Brad and he loved the script,” continues Jordan. “I could see that it would be his story and the emotions of the movie would be the emotions of Louis. Brad had to suffer that role, in a way,” he explains. “Shooting at night really got to him and the fact that he was giving a portrait of guilt… it went into his brain. I thought he was marvelous.”

Despite Jordan’s confidence in his leads, the feverish fandom surrounding Rice’s horror classic still made itself known in a rare example of pre-internet backlash. “We were shooting and I was in a bar one night. A girl comes up to me and says: ‘Why did you cast Tom Cruise as Lestat?’ I said: ‘Because I think he’s going to be great’ and she said: ‘No, no’, pulled up her dress and showed me a tattoo of Rutger Hauer on her thigh as Lestat. I thought, okay, that’s how insane the admiration for this book is, let’s prove them wrong.”

Lestat and Louis weren’t the only bloodsuckers brought to life in Rice’s novel. Interview With The Vampire also helped introduce the world to the talents of a young Kirsten Dunst, whose powerhouse performance as the devious and wronged child vampire Claudia cemented her status as one-to-watch. “We tested a lot of young actors,” says Jordan on finding Dunst. “What struck me about Kirsten was she was already a practiced actor. She must have only been about ten but she was just extraordinary. She ripped through those scenes. First of all, I thought ‘okay, this person can play the role without a doubt’ but not only that, I thought this person has acting in their soul.”

With his primary cast set, there were a few all-important details that Jordan and the film’s make up team – led by the late, great Stan Winston – had to decide upon to ensure the credibility of their pragmatic vamps. “The first thing you have to do with a vampire is work out where the teeth are,” smiles Jordan. “If you look at F W Murnau’s Nosferatu, he put the teeth right in the centre, like a rat, which is kind of chilling and weird. In the traditional Hammer vampire movies, the teeth were where our teeth are. We did tests – teeth in the middle, teeth at the side…” he says, recalling how they landed on the canine-tooth placement used in the film.

“The next thing we had to do create a sense of veins. I wanted their faces to have the veins underneath showing through, like they’re not entirely human and the skin had become too thin,” he explains. “I’d just had a child and kids love to hang upside down. I’d noticed how their veins would pop when they did that, so I said to Stan, let’s try to get this vein look on the actors – so we hung Tom Cruise and Brad Pitt upside down and traced their veins. We traced them gently on their faces and it gave this extraordinary effect. Poor Tom and Brad – every time they came into work, they had to hang upside down for 20 minutes – but to me, these vampires had to look as if they actually existed.”

Shooting primarily in New Orleans, Jordan worked closely with production designer Dante Ferreti to create a crumbling, forgotten world befitting of his out-of-time protagonists. “It was a unique opportunity because Warner Bros gave me a large budget to make a movie that was half historical epic, half vampire epic. Vampire films had always been rather cheap kinds of things,” suggests Jordan. “It was a portrait of New Orleans, America, Europe and that 18th century world of elegance and decay – but seen entirely through the eyes of people who live at night,” adds the director on the film’s visual tone. “Anne presented this vision of 18th century New Orleans, like a corner of Paris or Rome stuck in this swampy jungle. It was also a lovely opportunity to travel through time and take it right up to the 20th century” admits Jordan. “What would it be like to live in the 18th Century and see the world change? What would it be like to be stuck in your own generation but around you everything changes? Every single thing in the movie came from the book.”

Despite early skepticism from both Rice and fans alike, Jordan’s Interview With The Vampire was warmly received by critics following its 1994 release. The director’s faith in Cruise and Pitt paid off, too – so much so that Rice found herself compelled to write a lengthy open-letter review of the movie, praising Jordan and renouncing her previously negative thoughts surrounding Cruise as Lestat.

“It was a totally unique situation,” says Jordan, looking back. “I was given as big of a budget as Hollywood gave at the time and a unique project – and I was allowed to make it the way I make independent movies – but with two of the biggest stars in the world at that time. It was weird and wonderful…

“Audiences loved it and more importantly audiences of the book loved it – but I think in the end, the most important thing was that Anne Rice liked it because that’s all I was doing. I was trying to convey onto the screen the emotional heart of the feeling I got when I read that book. There’s a lot of luck involved with filmmaking to make a great movie. A lot of things have to fall into place that are out of your control, and with Interview With The Vampire they did fall into place, and they fell into place quite well, I think.”

Neil Jordan’s Greta is available now on DVD, Blu-ray and Digital Download. Interview With The Vampire is available on Blu-ray.