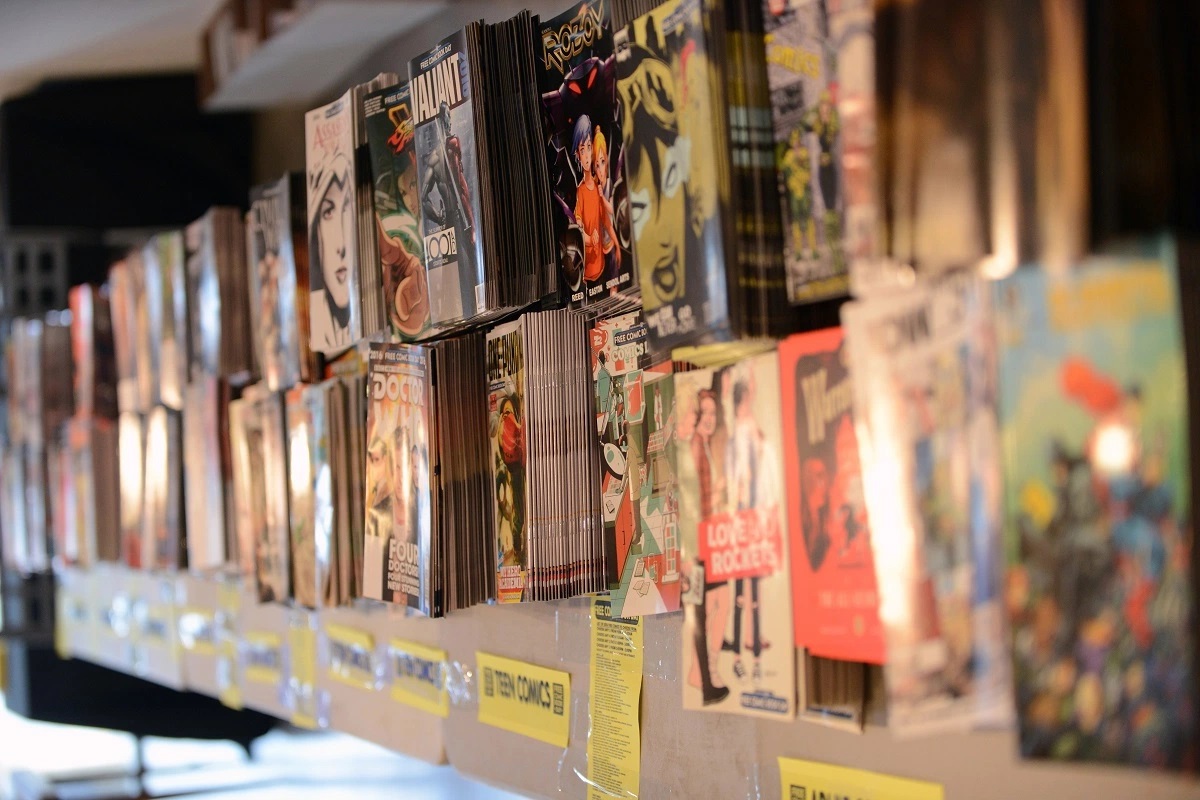 This week saw a wave of sexual misconduct allegations against men of varying positions in the comic book industry. The first came from artist Aviva Artzy, followed up by artist and writer Kate Leth, with support from the wife of the late Darwyn Cooke, Marsha Cooke, and convention organizer Andrea Demonakos, accusing Cameron Stewart of grooming underage girls. Grooming is when an older person establishes a relationship with a usually underage one, with the intention of developing a sexual relationship in the future. As a result of this, Stewart, the one time Batgirl co-writer and Seaguy artist, was let go from a previously unannounced DC project and had a variant cover for Image’s Ice Cream Man canceled.

Later, former Dark Horse editor Brendan Wright was accused by former colleague Bekah Caden of an extended campaign of sexual harassment and stalking. Wright left Dark Horse in 2015, and has been dropped by Starburns Industries Press, as well as an anthology benefit comic for gun violence survivors, and multiple other small press books.

And finally, Warren Ellis was accused by writer/editor Katie West of using his power and influence to emotionally manipulate women into often sexual relationships, emotionally abusing them, and abandoning them. West was joined by musician Meredith Yayanos, and photographer Jhayne Holmes, who later started cataloguing and providing support to other victims of Ellis. At last count, that group is over 60. Ellis has since been dropped from the Dark Nights: Death Metal anthology he was scheduled to take part in.

Ellis’ response, posted on Twitter and emailed to his newsletter list, is embarrassing in its totality. The idea that the showrunner of Netflix’s Castlevania, a man who has had multiple comics adapted into movies grossing hundreds of millions of dollars, the man whose millennial web forum launched the careers of half of comics, didn’t realize he was famous enough to abuse a power imbalance is insulting to the intelligence he used to demand of his audience.

What these three separate instances of abuse represent are yet another example of a pattern of toxicity at the intersection of multiple forces at work in comics as a whole: a toxic undercurrent that exists inherent to fandom and the complicity it encourages, and an industry full of informal work arrangements that encourages the rapid downward distribution of exploitation. And with comics at an inflection point, caused by the massive jolt to all the systems of the world by this pandemic summer, it’s worth examining the systemic flaws that enable rampant sexual misconduct to exist as open secrets, unaddressed, for decades, and think about systemic solutions.

Just about everyone who loves comics wants to make them. This isn’t universal; there are some people who enjoy simply spectating in the medium, but if you talk to 100 comics fans, I promise 98 of them are sitting on a pitch for something. Comic conventions are packed with people looking for portfolio reviews; the internet, jammed with people trying to get their scripts looked at.

While it was in existence, the Warren Ellis Forum was one of the most reliable pipelines for new comics talent. There are good rundowns of the contributions of the WEF to current comics culture from both pre- and post-toppling of this idol, but what neither mentions is that this was an accepted way to break into the business for a brief comics era – not only through the WEF, but through the Bendis boards, and through Mark Millar’s faint echo of the WEF, Millarworld. The internet dramatically expanded the potential audience for comics, and made it easier than ever to put out your own work, but it also combined with the superhero industry’s tendency towards bombastic personalities to channel talent development through a series of larger than life internet personas and the cyber networking events that sprang up around them. These, as is the convention social scene, are full of potential abuse.

One commonality to all of these cases (and not just these cases, but also with Brian Wood and Scott Lobdell and many others) was the access to the industry they dangled to entice women into relationships. That power imbalance is creepy and bordering on toxic from the start, even if there are anecdotes of it working out. There are different ways to solve this problem – using agents to mediate the relationship between publisher and creator, as Kelly Sue DeConnick suggests, would help, though it wouldn’t be a panacea. As would comic companies regularizing the talent scouting and development process. Greater systemic access for new creators closes off one channel that these predators hunt through. If it’s easier to get your break on superhero books through a new talent training school than it is to know somebody who knows somebody, then those intermediate somebodies lose access to impressionable, exploitable fans.

It’s also time for comics to reexamine the freelance system. The comics industry has a long history of exploiting its workers powered by the freelance system, and an under examined side effect of freelancing is that it absolves companies of responsibility for the actions of what should be their employees. Freelancers occupy a murky area in employment law, particularly when it comes to harassment laws. Some places, like New York City, explicitly cover freelancers under sexual harassment laws. But New York is the exception to the rule. Most freelancers in any industry have no legal protection against the sexual harassment or discrimination that we seem to hear about every other month. It’s long past time for comic publishers to adopt policies to mitigate these problems.

Finally, a portion of the responsibility for this abuse falls on all of us, the comics community. Time and time again, when one of these harassers is outed, they’re followed by stories about extensive whisper networks warning of the harasser’s behavior, or of victims being ignored, or harassment being downplayed by people in positions of authority. Every time one of these harassers is outed, the accusation is followed by a flood of additional abuse pointed at the victim. And without fail, this additional abuse falls into one of three categories:

“I like the opportunity the abuser afforded me in the industry.”

The first is a problem with broader civil society and won’t be eliminated until we can collectively toss hatred from acceptable public discourse, and is too big a problem to break down today. The second is a condemnation of the work arrangements common to comics and can be mitigated by the industry offering more opportunities than the abusers. The final one is a problem we should all be working to solve.

When victims don’t feel safe standing up for themselves through official channels, it’s not just the official channels that have failed those victims. Every member of the community at large has failed those victims, by failing to demand greater accountability of the ones setting and mediating the rules of the community, failing to demand more protection on behalf of their fellow fans and friends and present and future creators. Whisper networks exist because victims aren’t heard and believed. And they perpetuate the problem – you can’t be a part of a whisper network if you’re not connected to the network. They exclude large portions of fans, who eventually may find themselves targeted by these predators.

This is not on the whisper networks to fix, and none of this should be read as casting a drop of blame on the people working to protect whoever they can in the comics community. Nor should any blame be hung on the victims themselves – “We all should have seen the signs” is a cop out that ignores the complexity of abuse patterns and how abusers manipulate the rules to get away with their abuse. This is on the companies to fix, by ending their support and protection for known abusers. This is on the comics media, to stop promoting and protecting known abusers. This is on cons, to stop platforming abusers and to do what they can to control the social scene that springs up around them. And this is on all of us as fans, to stop putting these people on pedestals. Sometimes a monument needs to be torn down.

Is MJF Ready for the AEW World Title?
There Are Hidden Sparrows All Over The Umbrella Academy Season 2
Star Wars Poe Dameron: Free Fall Review
NTU Singapore scientists build ultra-high-speed Terahertz wireless chip
AEW All Out 2020: Date, Matches, Roster, and How to Watch